The Origins Of The Mercedes Benz G-Class

This is a work of wonder that captivated the motoring industry and kept its original design for at least 40 years and it is still a beauty by today’s standards. An SUV that is known by almost every living being because of how it looked and what it represented. The Mercedes Benz G-Class is on every petrolhead’s dream car list showing what it means in the automotive community. It started out as an ordinary workhouse vehicle but later changed into one of the most respected luxurious vehicles on the planet.

It is popular amongst celebrities and high-class people because it serves as a symbol that represents style and status. This is because of its eye-catching looks and the unbearable factor of it being too cool. On this article, I will highlight how it came about and why it is so special. There is still a lot to learn about the Mercedes Benz G-Class, so I will only be summarizing some few key points in its existence.

The G-Wagon or G-Class is a mid-size luxury SUV with four-wheel drive and remains the longest produced Daimler vehicle ever with a span of nearly 40 years in production.  It is produced with a body-on-frame construction which is basically the body on top of the skeleton which is the chassis. Gelandenwagen translates to “cross-country vehicle” and that means a rugged, capable off-roader.

The year is 1972, Daimler Benz and Steyr-Daimler-Puch, which is based in Austria, join forces and the development began to create an SUV that will be used for military purpose and also used for off-roading. In 1973 and 1974, two-door prototypes emerged and began to be tested thoroughly. It took a long 7 years to make the SUV ready for production and finally, they hit the mark in 1979. The same year the first generation W460 Gelandenwagen, or for short “G-Wagen”, was put into production, with most units made almost entirely by hand, and instantly became a favourite in the military mobile fleet.

From 1981 to 1986, various updates were made to the G-Wagen fitting in an automatic transmission, central door locking, differential locks and exterior accessories such as the headlamp grilles. A facelift then came in 1990 with ABS (anti-lock braking system) and permanent four-wheel drive. In 1992, the G-Wagon was revised together with the chassis and the W461 was introduced and made available specifically for military usage, public authorities and NGOs, and even today it is still being made for that purpose only. 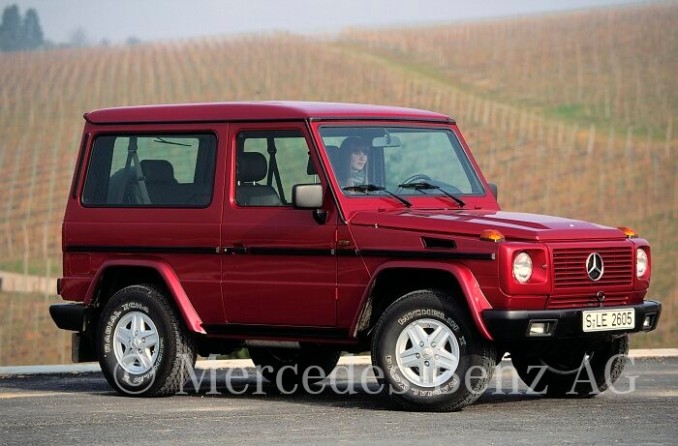 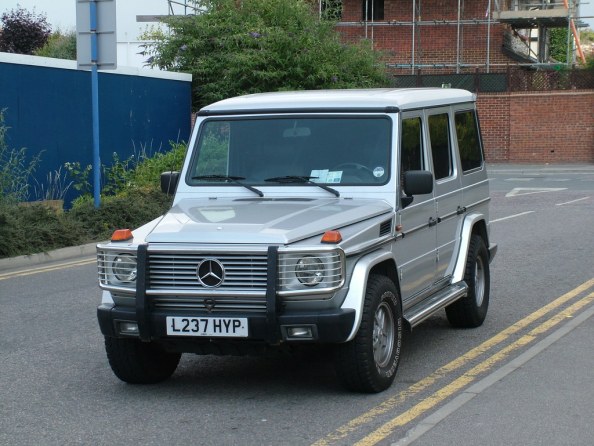 The one we know as the “civilian G-Wagon” was also introduced in the same year and became the first-generation W463 G-Wagon and this is where it started gaining its luxury reputation. It retained the boxy shape of the W460 but with a four-door design and had the W461 powertrain. People were stunned when this came out because it being a military-style vehicle with luxury features was a recipe for disaster but surprisingly it worked and sold pretty well. Basically, it was utilitarian vehicle turned into a luxury, urban driving vehicle and in 1994 it was officially renamed the G-Class.

For the civilian model, the exterior was merely changed to smoothen the design by flattening the front fenders, narrowing the front grille and fitting square headlamp surrounds. The interior received wood trim and leather upholstery plus seats with lumbar support, revised instrument cluster and soft padding was added on the armrest and door panels. Various new engine options were added and you had the option of a naturally aspirated, single turbo, twin-turbo and supercharged displacements. 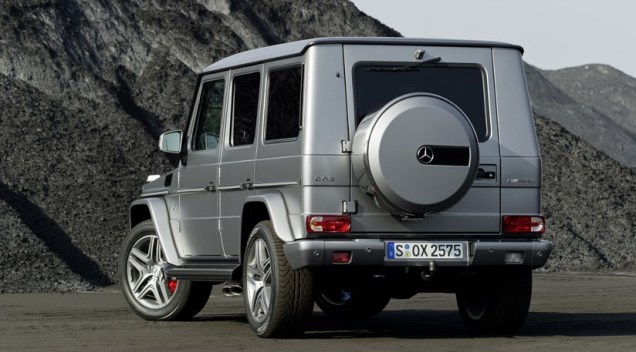 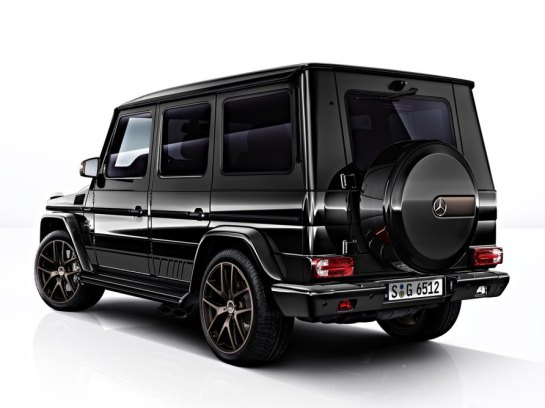 The year is 2007 and this is where the G-Class received a major update with modern features such as a reversing camera, tire pressure monitoring system and navigation. And all of sudden everything was dialled up to eleven in 2008 with the suspension and chassis improved.  After the latter G55 AMG was axed, the G63 AMG was reborn in 2012 because it once existed from 2002 to 2003 with a V12 and now it was introduced with 5.5 litre V8 bi-turbo and this model variant is not to be confused with the “Mercedes-AMG G63” introduced in 2015 with more power. During this period, the G65 hailed the throne as the top of the range G-Class and it had a gigantic 6.0-litre bi-turbo V12 engine and it was later updated for the 2015 year model which produced a peak 621 hp (463 kW) and an incredible 1000 Nm of torque. This enabled it to sprint from 0-100 km/h in just 5.3 seconds and had a top speed of 230 km/h which makes it the fastest and most powerful G-Class ever made. The engine was also used in the Mercedes-Maybach G65 Landaulet.

From 1990 to 2018, the W463 G-Class had seen a total of 18 different petrol and diesel engines and 27 different model trims on the production line, excluding the special models. And speaking of special, you’d think that the G-Class was not special enough and you’re right, well sort of.

Mercedes Benz decided to make a G63 6×6 which is a six-wheeled pick-up version of the G63 AMG and it has tires you can inflate and deflate at will. It is a huge and crazy G-Class and only 69 units were made. Then there is the armoured G500 Guard version, the G-Class Cabriolet with 200 units ever made, G500 4×42 with a raised-up suspension and even more special models by Mercedes. There are various aftermarket tuners such as Hofele-Designs, Brabus, Lumma and Mansory which made their own versions of the G-Class. 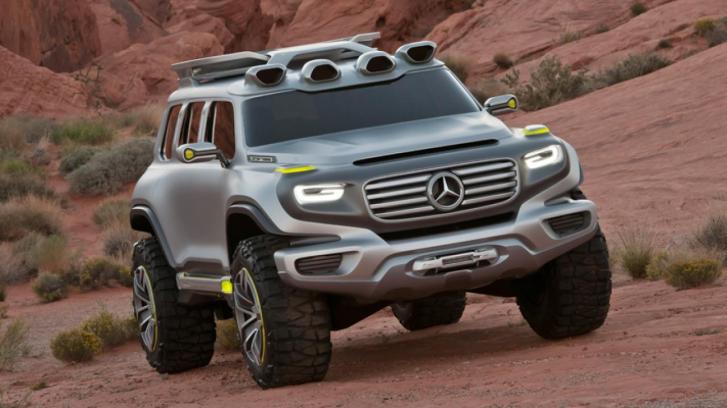 A concept car revealed in 2012 called the Ener-G-Force which was for the Los Angeles Design Challenge interpreted the future police car and it has fuel cells generating electricity to drive the motors. The roof racks hold water tanks with the hydrogen converter, it has 20-inch wheels and side skirts illuminating the charge. 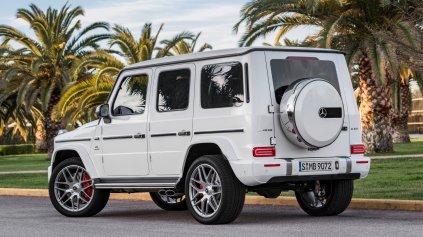 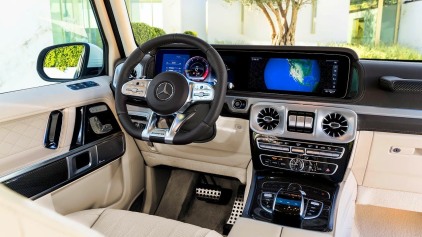 For the new second-generation W463 G-Class which was revealed in 2018, there are only four engines on offer including the 4.0-litre twin-turbocharged V8 engine in the Mercedes-AMG G63 producing 577 hp (430 kW) and 850 Nm of torque. It can sprint from 0-100 km/h in 4.5 seconds and has a top speed of 220 km/h. It has been thoroughly redesigned and modernized with the interior receiving dual 12-inch digital display screens for the instrument cluster and infotainment system. There are various features taken from the S-Class which are lane-keeping assist, active brake assist, the sweet-sounding Harman Kardon sound system amongst other incredible features included.

Throughout its history, the G-Class has seen a significant rise in popularity and favouritism because of how cool it looked. I highly respect the G-Class because even though it has been fitted with gizmos and computer equipment, it still aligns with its heritage of being a pure off-roader. We shall see how long Mercedes Benz will keep this legend alive.