Mercedes Benz has had some successes in South Africa with it’s models like the C-class and the E-class. But now that the bakkie market is increasing in demand and Mercedes Benz has come up with a bakkie to enter the market. It is called the X-class. Don’t be so quick to judge thinking that because it is a Mercedes Benz and it is luxurious, it will not be capable off road as a Ford Ranger. Don’t be so quick to judge the merc because don’t forget that their SUV models such as the G-class and the M-class have great off road capability. It’s funny that soon you will be seeing a Mercedes Benz pickup truck on the streets, it will be hilarious.

I think it’s great that Mercedes Benz is exploring all options in expanding their brand. They make cars, panel vans, buses, trucks and now pickup trucks. Now all that’s left is motorbikes and they will get the right to say they can do anything. What’s next?  A range of aeroplanes? You never know.

Alright back to the X-class, production will start next year and it will be available with one petrol engine and three diesel engines. This includes four model trims:

There will be a selection of two transmissions: A 6-speed manual and a 7-speed automatic transmission. All model trims will have four-wheel drive.

According to Mercedes Benz, the new X-class will be the world’s first true “premium” pickup truck. For this model to be a true bakkie, Mercedes Benz has a joint venture with Renault-Nissan alliance to develop the top bakkie that will overthrow it’s competitors. Now that the bakkie market in South Africa will be welcoming the new X-class soon other bakkie manufacturers need to come up with strategies to make their bakkies even better. 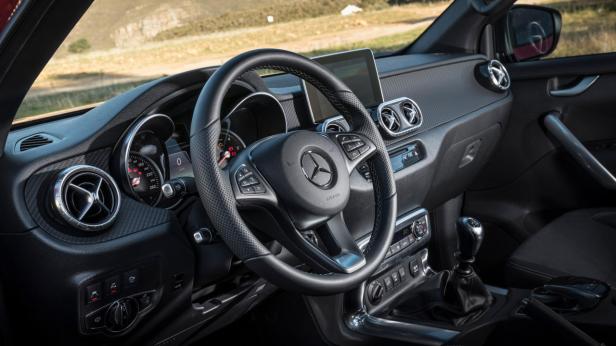 It will have it’s own unique interior design and features that will keep it’s driver in a relaxed mood. This includes an 8.4 inch infotainment system which comes with Garmin-based Sat Nav. You can expect some leather upholstery and some of that intelligent merc features. Futher information concerning other figures are yet to be released by Mercedes Benz. The X-class comes with equipment that a bakkie should have like a canopy, a light that illuminates in the back, a plug for power tools and a tow bar. South Africans are mostly excited about the new X-class and we dearly do hope it is very good.

This might be a silly idea but I think Mercedes Benz should consider including an AMG model which should have a 4.0 litre twin turbocharged V8 with around 600 hp. It should be called the X63 AMG S. I know that it is insane but imagine having that in your garage, it will be very cool. Besides American pickup trucks have powerful model trims with V8 engines such as the Ford F150 Raptor V.

I think the Mercedes Benz X-class will fit just right in the bakkie market and because it is a Mercedes Benz it will sell very well, like very,very well. Prices are yet to be announced. The Best or nothing!